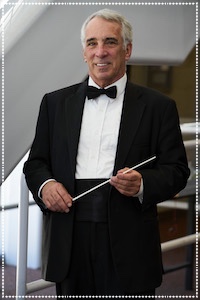 The 95 piece Los Angeles Symphonic Winds are one of the most critically acclaimed and internationally recognized wind ensembles in the United States. Since 1983, the L.A. Winds have been a leading force in Southern California’s cultural community. Praising the Winds for their “dedication to the highest standard of musical excellence” former Governor Arnold Schwarzenegger wrote: “As one of the great cultural treasures of Los Angeles, your band has enchanted audiences with fantastic performances, elegant melodies and graceful harmonies.”

As a result of annual tours throughout the United States, Canada, the United Kingdom, China and Europe, audiences all over the globe have delighted in the L.A. Winds’ eclectic programs. Membership is drawn from the vast pool of gifted Los Angeles-based musicians, many of whom have performed with major symphonies, motion picture and television recording studio orchestras and entertainment-world headliners. The L.A. Winds present a series of concerts in the beautiful Calabasas Performing Arts Center, and in the summertime, they perform before tens of thousands of appreciative concertgoers on the Warner Center Park summer concert series as well as broadcasts and podcasts from the Los Angeles County Museum of Art.

The Los Angeles Symphonic Winds (Fed tax ID # 83-1314966) is a charitable organization under Internal Revenue Code Section 501(c)(3). With the help of grants and donations from a variety of governmental, corporate and institutional organizations, including the Ralph M. Parsons Foundation, Ralph’s Supermarkets and Merrill Lynch, the band has sponsored a significant number of community service events. Our Children’s Concerts, for example, introduce young audiences to the sonic delights of the symphonic band while our Chamber Music Concerts provide an intimate look into the multi-faceted wind repertoire. The release of the critically acclaimed CD “Raggin’ the Baby to Sleep”– a compilation of original American ragtime music for concert band– helped underscore the L.A. Winds’ commitment to both well-known and lesser-known music.

Premiere performances of works by contemporary composers such Pulitzer prize winner David del Tredici and Grammy winner Michael Daugherty help advance the quality of wind band music both nationally and internationally. A number of compositions written specifically for the L.A. Winds have also become part of the growing repertoire for symphonic wind ensembles. In addition, guest conductors such as Col. Arnald Gabriel, Col. John Bourgeois, and H. Robert Reynolds, have made significant contributions to the Winds’ development and notoriety. The high performance level of the Winds has led to performances with such internationally acclaimed soloists as Jens Lindemann (formerly of the Canadian Brass) and Dale Underwood (former soloist with the US Navy Band.)

The L.A. Winds’ repertoire encompasses a wide variety of classical, popular and commercial music in exciting arrangements that highlight the diversity of styles and sonorities of the contemporary wind band. As a result of their performance at the prestigious Midwest Band and Orchestra Clinic in Chicago in December of 2004, the Winds were invited to perform at the Mid Europe Festival in Schladming, Austria in July 2007. This was the Winds’ fourth European tour since their first tour to Italy in 2000. Recent tours have included Ontario, Canada and New York in May of 2010, Paris and Luxembourg in 2011, Eastern China in 2014 and California in 2015. More recently, the LA Winds were the featured performers at the 2016 Los Angeles International Music Festival at the iconic Walt Disney Concert Hall.  Plans are also being developed for the Winds’ return visit to the Festival des Anchez in La Croix Valmer, France as well as multi-city concert tours of India and China.